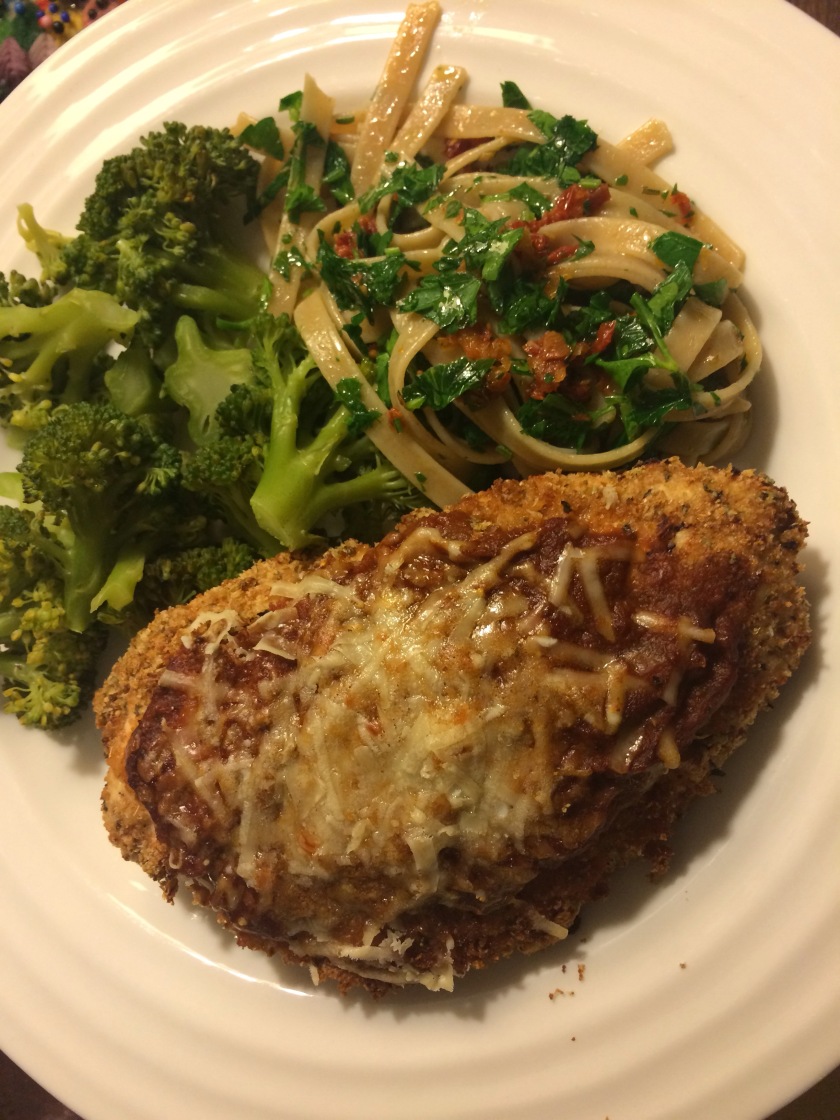 When you’ve had a long day and just want to decompress, take a few minutes to get this going, and have a glass of wine while you wait!

2 boneless skinless chicken breasts (not the frozen ones with added salt!)

Preheat oven to 400F. Line a cookie sheet or lasagne pan with parchment.

Mix egg and milk together in a pie plate.
Put crumbs in another pie plate.

Dip each piece of chicken in egg wash, then in crumbs, patting to coat. Place in pan and put in the oven.

After 30 minutes, turn chicken over. In 15 more minutes, spread  marinara on top of each chicken breast and grate on Parmesan.

Today Advent begins. We’re well underway with the secular preparations for Christmas, but now we start the real work of preparing ourselves to celebrate the holy feast.

Even the food begins to take on a more symbolic character. So for our dinner, we prepared a roast chicken breast, the whole thing, just with legs and wings removed. We coated the roast with some Daily Dijon from Kozlik’s, thyme, and orange zest. After nestling it on a bed of onion in a Dutch oven, we added the juice of the orange, and a splash of white wine.

We popped the whole thing in a 450F oven uncovered for half an hour. Then we covered it until done. (Depending on the size and how cold it is when you start, this will take 1/2 hour to an hour more. Your instant-read thermometer should be at 185.

At the same time we roasted some beets.

While the finished chicken rested for 10 minutes or so, we steamed this varietal cauliflower – it looks like tiny Christmas trees on the plate. It was delicious and for that we’re very thankful.

This roast chicken dinner features some traditional fall flavours (like red potatoes and cabbage), with a twist.

First, we zested a lemon and grated some ginger. We mixed this with coriander, the juice of the lemon, and about a teaspoon (5ml) of olive oil. This was rubbed under the skin of the chicken. Then to the pot, we added some quartered red potatoes, and wedges of cabbage. We rubbed the cabbage with a little sesame oil.

We roasted it without a lid until it was nearly done, then added some water, popped on the lid, and put it back in the oven for about 10 minutes to get the chicken up to temperature. When the chicken was done, we tented it to rest and returned the remainder of the dish to the oven (now turned off) to keep warm.

Putting the lemon under the skin gave the chicken a strong, lemony flavour that might have been diluted if we’d rubbed it on the outside. The sesame added a nice touch to the sauce. Best of all, only one pot to clean!

We had the carcass of the chicken, a leg, and a cob of corn left in the fridge from the other night’s dinner. What to do? Make soup!

While we watched t.v., we put the carcass in a large Dutch oven with a sliced onion and set it to boil. We turned it down and let it simmer for a couple of hours, then cooled it down until we could handle it.

After that, we removed the meat from the bones. We set the strained broth to boiling again. We added some sliced radish, green and yellow beans, and yellow bell pepper. We also put in a few sliced garlic cloves and a diced onion. For herbs, whatever we had (in this case, summer savory, and a grind of salt).

When the onion seemed to be soft, we threw in about half a cup (125ml) each of red rice and Puy lentils. After about half an hour, we removed the corn from the cob, and diced the remaining chicken. This, plus the original chicken, were added back in. What a great meal, all from leftovers. Add some bread and wine, and it’s even good enough for guests.

It’s corn season! There’s corn at all the small veg shops in the walkable neighbourhood, and at farmstands around the outskirts of the city. We boiled up a few delicious cobs (a little butter, and you’re good to go!)

As farmer’s market begins and more seasonal products are available, the menu plan needs to be flexible. What looked good today? What was a great deal? What was fresh?

This week we had some chicken thighs in the freezer. But asparagus is really the star, and it’s everywhere. So we made our usual chicken marinade of olive oil, lemon, pepper and garlic, and let the thighs rest a bit. We put similar flavours on the asparagus. Everything went on the grill, and the meal was rounded out with some delicious short grain brown rice from Better Bulk, which had been pre-cooked and frozen. A quick heating in the microwave (or steaming on the stovetop) and we were ready to eat.  Relaxing and easy, without over-heating the house as the spring temperatures ramp up for summer.

It’s been a long week of travelling but we had a great visit with friends and family yesterday, and went to a few sites of Doors Open Toronto this weekend. After playing catch-up, gardening, and making a pilgrimmage to both Hooked and Better Bulk, we wanted a simple dinner.

We started by marinating some chicken in lemon, garlic, and olive oil (including the zest of the lemon, in long, gorgeous strips). While the grill was heating, we made the BBQ potato thing…today we had some small red potatoes, an orange pepper, and a red onion, plus some delicious rosemary.

Patience is a virtue when grilling chicken thighs, but they stay nice and moist and get that great smoky flavour. Served with the potatoes and veg, and a glass of wine, what else could we need?

After getting a taste of spring last week, we’re back in the deep freeze. So we were happy that, for whatever reason, we’d put Parmesan Chicken and Rice on our menu plan yesterday.

It has all sorts of things going for it – it’s light, tasty, healthy…and warm! The chicken came from Royal Beef (they’re about more than beef!) and the brown rice from Better Bulk. But both were in the freezer, waiting for one of those days when you’ve already shovelled twice and don’t want to venture out again.