I don’t buy store bread, typically, except the occasional pitas or wraps. I make bread once a week and that’s more than enough for the two of us, even if we have dinner guests. Lately, I’ve really been on a sourdough kick – inspired by Michael Pollan’s Cooked.

The idea of bread that rises without the use of commercial yeast appeals to a person like me, who loves inventing things, and wanted to grow up to be an astronaut.  Combine that with my search for the perfect technique that combines my commitment to using as much whole-grain flour as possible, with getting great crust, a moist interior, and that elusive “spring” where the interior forces itself through the slash as it bakes in the oven, and you can imagine lots of sourdough-baking in my future.

Unlike the precision of, say, cake baking, sourdough isn’t so much a recipe as a science experiment (albeit a tasty one). I don’t typically use a recipe so much as check out other bakers’ successful tips and then work at adapting it until it feels right. I’ve used different versions, but for starters I would suggest you check out Anne Marie’s (the Zero Waste Chef). Check out her other incredible, helpful, and sometimes edible posts, also.

You might also like the post specially-designed for beginners from The Perfect Loaf. He has many, many versions of sourdough – which makes me slightly fearful of my eventual fate, having embarked on this journey.

The most interesting thing I’ve noted is that both the examples provided by these excellent bakers seemed lately to be unduly wet. Sourdough afficionados will tell you the dough should be wet, but I’m talking ridiculously wet, almost like soup. Yet it didn’t start out that way at the autolyse stage, nor during the folding. It seemed to happen during the bulk fermentation. What I’ve realized is that, being a typical Toronto summer, it is much more humid than it was in the spring, and definitely more than the winter. So I think the dough is absorbing more moisture from the air. The other day it was 60% humidity inside, with the air conditioning turned on. So I’m learning to adjust for that.

Anyway, each loaf has turned out very well, some better than others. This pair of loaves have been a real treat, as you can see! I hope you’ll share your favourite way to use sourdough bread.

This is a super delicious and easy breakfast for two.

In your blender, blend 1/2c or 125ml shelled, unsalted sunflower seeds until finely crumbed. Add two ripe bananas, a sprinkle of cinnamon, and a handful of baby spinach. Last of all, top up to the 1l or 4c line with unsweetened almond or cashew milk. Blend on high until smooth, and have an awesome day.

The other day I posted a gorgeous purple cabbage and blueberry smoothie on my Facebook. It was met with much skepticism and derision (yet, might I add, more discussion than any post in recent memory). So today I have another tasty smoothie for you. What you need to know is that it can be a bit like mixing paint…putting many beautiful colours and flavours together like this: 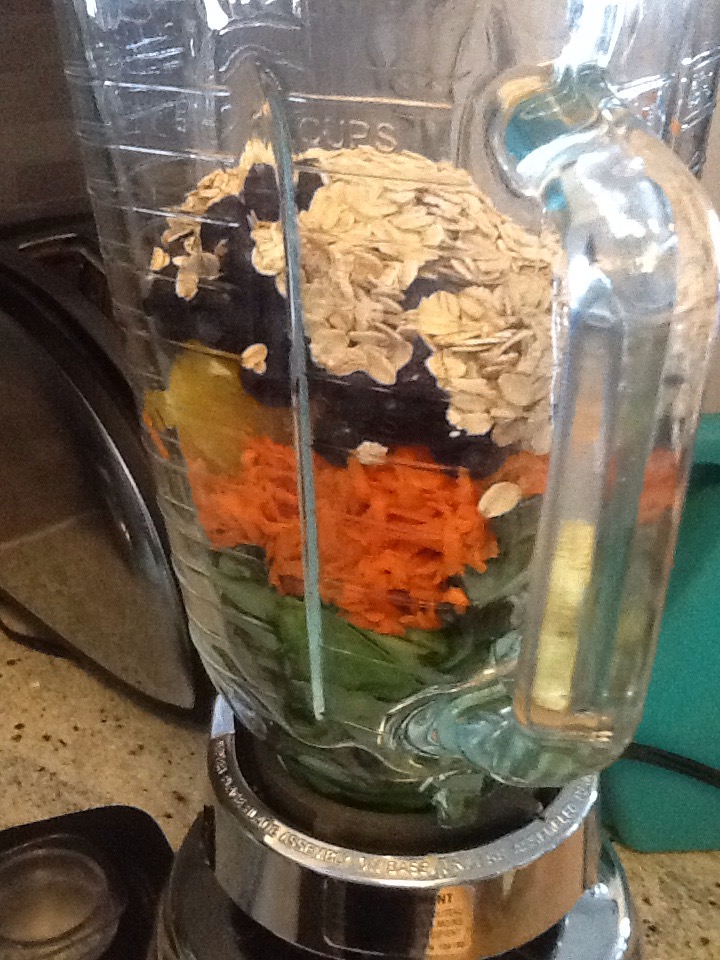 May result in something not quite so pretty (but amazingly tasty), like this:

I want to take a moment to thank all of you who follow, comment, and interact. It’s very gratifying to share this wonderful planet with you. You’ll notice in the coming days and weeks that I will continue to have lots of food posts, but the “walk” and “live” parts of WalkEatLive will be given a bit more space as well. It’s also my plan to do some more promotion and review of resources I use, like cookbooks, tools, resources, workout gear, and places and things to see and do. I hope you’ll stick with me on the journey.

I like a toast soldier as much as the next guy, but this is a great way to get more flavour and vitamins if you favour an eggy breakfast. 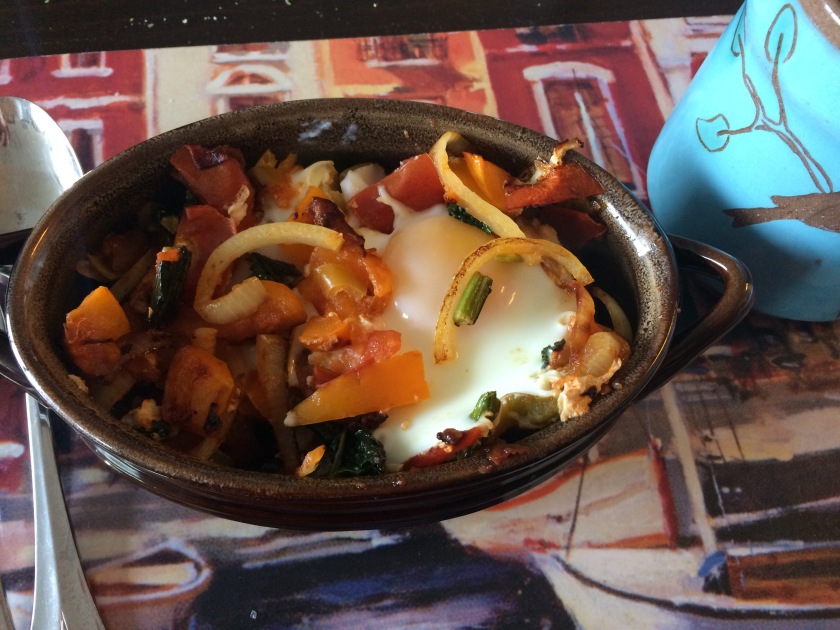 I started with a sliced onion, half a bell pepper, diced, and a chopped hot pepper in a nonstick pan. A regular pan will work also; just add water in small increments to keep it all from sticking. After it got going a bit on medium heat, I added about a cup of chopped kale.

Once all this was softening, I chopped and added two ripe tomatoes – one red, one yellow. Once it came to full heat, I cracked in four eggs, reduced the heat to medium-low, covered the pan and cooked undisturbed, save occasional checks until the eggs were done.

Quick, easy, and tasty. To veganize I might substitute cooked kidney beans or tempeh for the eggs. 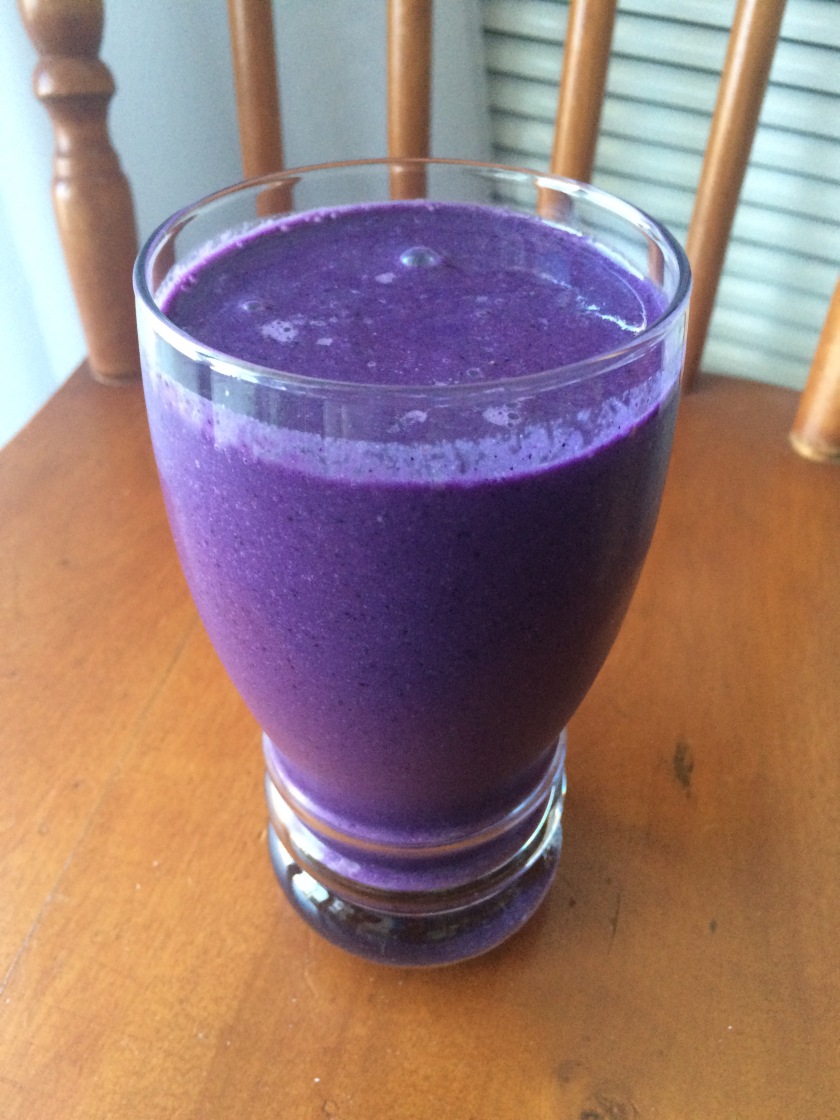 There are SO many opportunities to sneak in some extra veg – like this delicious smoothie. It features red cabbage (with some peaches, mangoes, strawberries and blueberries for good measure). I topped up the blender with almond milk, a few sunflower seeds, and some cinnamon, and we were all set.

If you’ve been following me for awhile, you know I am a great promoter of buying local. However it’s often darkest before the dawn, and at this time of year, when fresh local produce is just barely trickling into our stores, I have been known to give in to a moment of weakness. I had just such a moment yesterday, when I bought kale that had been trucked in, all the way from Texas. This entire smoothie is as un-local as it gets, with the kale, avocado, almond milk, frozen peach-mango-strawberry mix, cinnamon, and turmeric.

Despite all this, and the perhaps unappealing colour, it’s delicious. In fact, it has already transformed my day. I could have been grumpy at the freezing temperature, but instead, I’m starting with a spring in my step and a smile in my tummy. 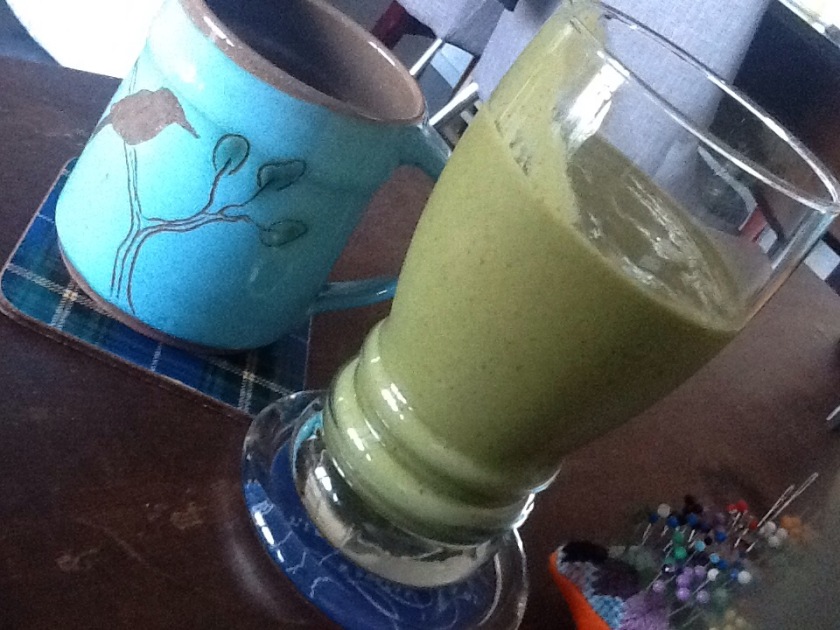 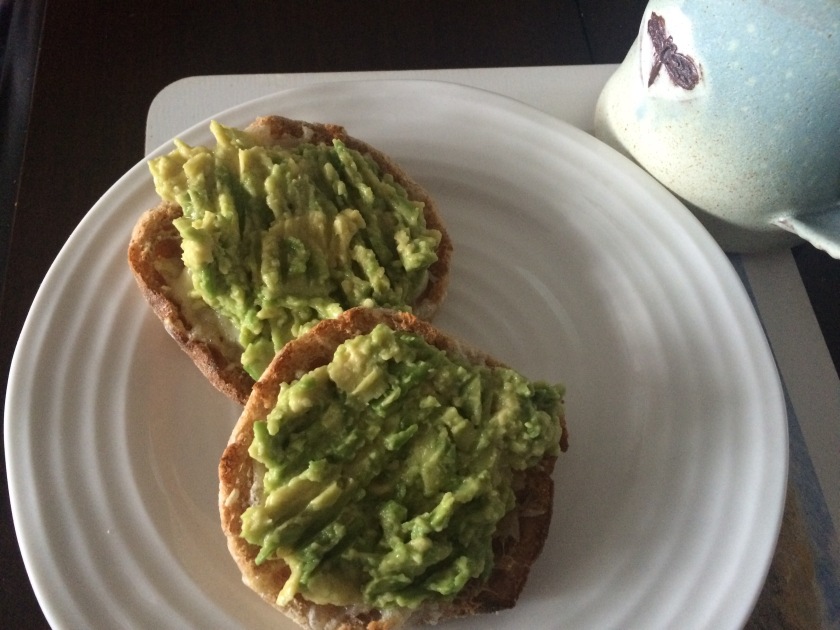 Start by grating some cheese – in this case, aged cheddar and Caerphilly – but mixing up flavours will give endless tasty results. For two, cut a small avocado in half and mash with a squeeze of lemon juice. Then preheat the broiler and line a cookie sheet with parchment. While the oven heats, split and lightly toast two whole wheat English muffins.

Top the muffins with the grated cheese and place on the cookie sheet. Broil just until they are nicely melted. Spread the avocado on top and voilà, they’re ready to serve. Stand by for compliments.

…or perhaps, lax-ury? This morning’s omelette is filled with a decadent mixture of asparagus, mushrooms, onion, and baby potato slices. It is tasty enough on its own, so the two thin slices of thyme and pepper gravlax on the side make it extra special. It’s more of a method than a recipe, but here’s what to do, for two:

Snap the tough ends off the asparagus and cut the good bits into 1″/2.5cm lengths. Thinly slice 1/4c or 60ml mild white onion. Add to this, 6 sliced mushrooms and 2 thinly sliced baby potatoes. Stir the whole thing together in a nonstick pan over medium heat until nicely cooked. Now, pour in three beaten eggs, and turn the heat to medium-low. Lift the edges with a spatula, letting the uncooked egg run underneath. Fold in thirds and cut in half to serve.

We bought our gravlax from De La Mer on the Danforth; look for gravlax at a good fishmonger near you. 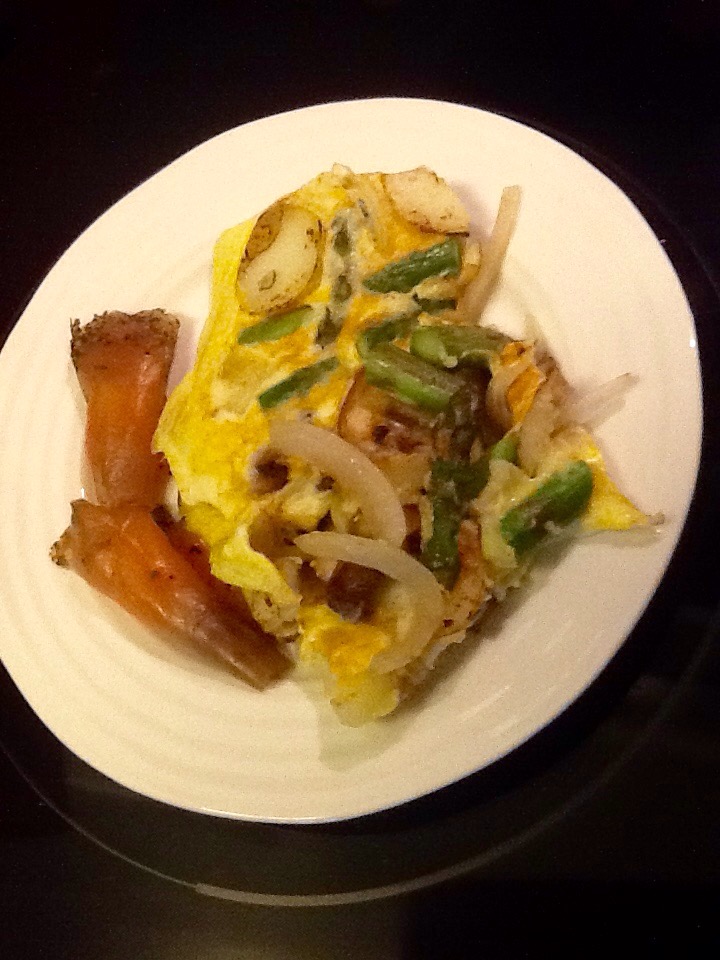 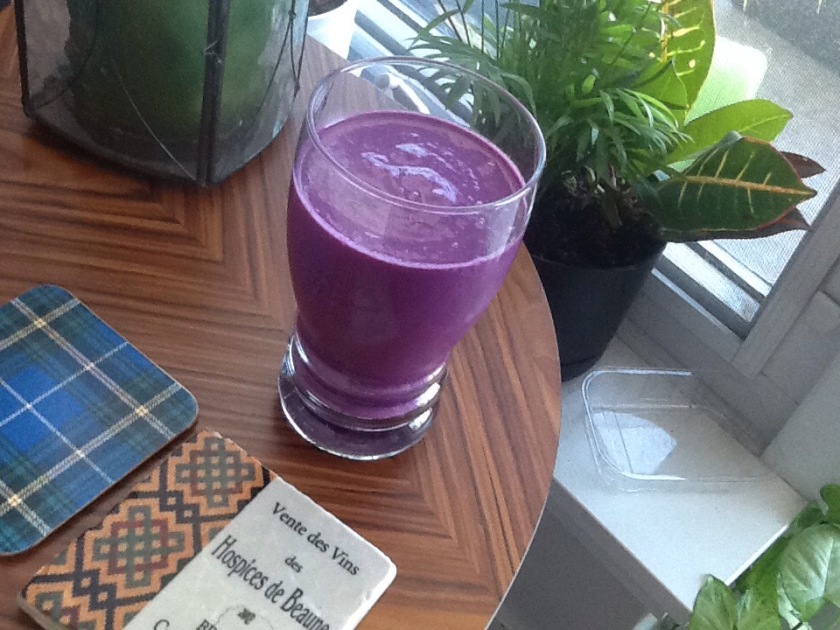 Who could resist this gorgeous royal purple colour!?! And no, despite the coaster, no wine was involved. What you might not know, is that it packs a nutritional punch. For two, I blended:

With enough unsweetened almond milk to fill the blender to the 4c (1L) mark.

Process until very smooth and creamy, and enjoy. I know I am, as I reflect on how grateful I am to have this special day with both my kids and their delightful partners.

Sometimes a sweet treat for breakfast hits the spot. This breakfast pudding, or smoothie bowl, in common parlance, is fast and delicious.

Blend until smooth, and top with chopped walnuts and grated coconut. Pumpkin seeds would look and taste fabulous as well! 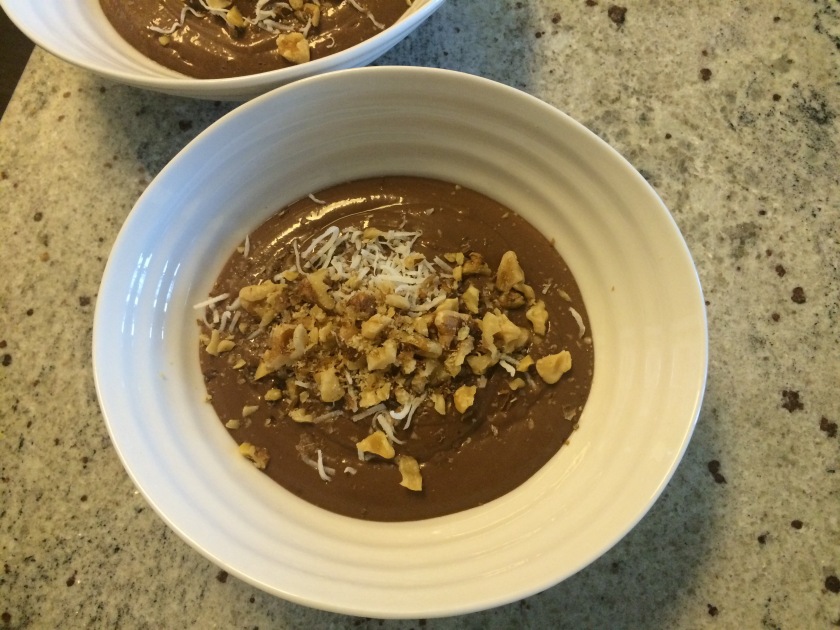